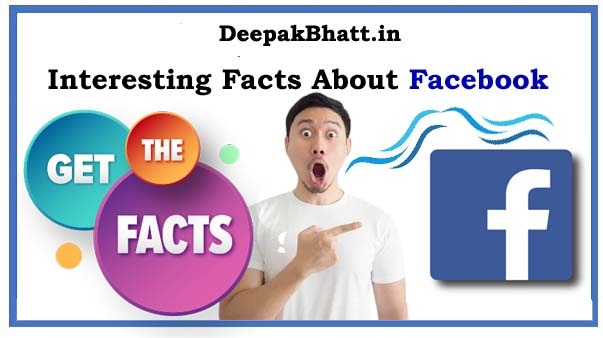 Interesting Facts About Facebook Friends, there are many social networks in the world. But Facebook is considered to be the most famous social site.

Facts of Facebook:- These are some interesting facts related to the world’s largest social media site ‘Facebook’, about which you hardly know.

3. The decision was taken by Mark to name the Facebook ‘Like’ button earlier Awesome. But no one listened to Mark.

7. Like many features on Facebook, there is also a Poke. But if you ask someone its meaning, hardly anyone will be able to tell its meaning. Because even Facebook itself has not decided its meaning or its work. But you can get blocked if you use it too much.

8. Not directly, but fifty percent of the people who are on the Internet in the whole world are connected to Facebook.

9. If Facebook’s server goes down, then it will lose 25 thousand dollars every minute.

10. When Yahoo and MTV wanted to buy this site for 10 million dollars, Mark said? First, let me create an open global platform for information exchange, then I will think about profits.

12. If Facebook were a country, it would be the fifth largest country in the world after China, India, the USA, and Indonesia.

13. There are about 6 lakh hackers attacks on Facebook every day.

14. In December 2009, Facebook made some changes in the privacy setting, due to which a picture of Zuckerberg in which he is holding a teddy bear became public.

15. In 2009, Facebook refused to give a job to Brian Acton, the co-founder of Whatsapp.

16. In 2011, Facebook became the biggest cause of divorce in America. One out of every 5 marriages in the US is linked to Facebook at some point.

17. you may not know, but the Facebook globe notification tab) changes according to the location of the users.

19. The constitution of Iceland was written in 2011 with the help of Facebook.

21. If you want to earn money sitting at home, then hack Facebook. Yes, the amount of 500 dollars is given to every person who can hack Facebook. Even if you catch a mistake on Facebook, you will still be entitled to a reward.

24. Mark Zuckerberg gets one dollar every year as salary.

25. A Facebook website is not only in Hindi and English and some selected languages, users can translate the Facebook page into 70 different languages ​​according to their convenience.

26. There is a simple reason behind Facebook being painted blue. Its founder Mark Zuckerberg is color blind. They don’t know the difference between green and red.

27. Due to the privacy settings of Facebook, every user has been given the facility to block, but the thing to note is that even if you want, you cannot block Mark Zuckerberg from Facebook. If you try to do this, an error message will appear on Facebook.

28. 48% of people check their Facebook accounts as soon as they wake up in the morning.

31. Since Facebook was launched, there have been about 171 billion friend connections and an average of 298 billion photos have been uploaded and 1.30 trillion likes have been received.

32. About 1 lakh 7 thousand links are shared on Facebook every 20 minutes and 3 million or more messages are sent and 2 million friends are requested.

34. The 5 most popular brands on Facebook in the US are Walmart, Target, Samsung Mobile USA, Amazon, and Subway.

35. During Facebook’s first summer, the Zuckerberg family spent $85,000 to keep the company afloat.

37. More than 350 million photos are uploaded to Facebook every day.

39. Facebook had found out in one of its reports that there were 14.5 crore fake accounts on Facebook and the special thing is that most of the credit for creating fake accounts goes to us Indians.

40. The most puzzled woman engineer on Facebook is Ruchi Sanghvi of India. He was the one who gave the idea of ​​News Feed to Facebook.

41. When Facebook was created in February 2004, it was named thefacebook.com. A year later i.e. in the year 2005, Mark removed the from it and renamed it facebook.com. You may be surprised to know that Zuckerberg had to pay 2,00,000 dollars to buy the facebook.com domain, which would be equal to Rs 1 crore 40 lakhs as of today.

42. Facebook redesigned its layout in 2007 to use a photo of a man who was then known as the “Facebook Guy”. It was liked by many, while some people criticized it as well. Just a few years ago, David Kirkpatrick in his book “The Facebook Effect” uncovered this mysterious figure and revealed that it was a manipulated photo of the famous Hollywood actor Al Pacino that was made by a friend of Mark’s.

44. 300 Petabytes i.e. 300 million GB of data is filled in the servers of Facebook. You can find out how much this data is from the fact that in the entire human history, all the books written by including all the languages ​​of the world are also included in only 50 Petabytes.

45. Due to excessive use of Facebook, people often get a mental disorder called – Facebook Addiction Disorder (FAD). In this, people get used to using Facebook too much.

46. Facebook initially gave a feature called WireHog, through which people could share any type of file (eg- pdf, photo, video, etc.) with their friends. But then later Facebook closed it in 2006 after some privacy concerns.

47. In the beginning, Facebook could only be used by students of America’s famous colleges and employees of well-known companies, including Harvard, and big names like Apple, Microsoft, Intel, and Amazon.

48. Facebook opened to everyone in September 2006, and just a year later, Facebook crossed the 50 million user mark.

49. If you use Facebook a lot, then you are probably aware that there is a feature called Poke on Facebook which does not mean anything. When Zuck was asked about this feature, what did poke mean, his answer was something like this- “We thought why not make a feature that does not have any special meaning and people just like each other with it. Can only bother.” This mysterious feature of Facebook is often used to nudge friends and flirt.

50. Mark Zuckerberg describes himself as a Harvard graduate on his Facebook profile, which is not entirely correct because Zuck had not completed his degree and dropped out of college to pursue Facebook. Once when he was asked about this, he said- “It is completely true and I am aware of this issue but what is it there is no setting for Dropouts on the Facebook profile so I had to write graduate. “

51. Facebook spends about $ 100 million every month i.e. about 7 billion rupees only on the work of storing the data of the users i.e. Server Hosting.

52. On average, 8 new accounts are created on Facebook every second and 7,246 in 15 minutes! These statistics show how popular Facebook is.

53. In the year 2015, 22% of the revenue of ads appearing while running the Internet on mobile worldwide went to Facebook’s account. That is, if all the tech companies around the world earned 100 rupees by showing ads on mobile, then Facebook alone earned 22 rupees in it.

54. More than two lakh advertisers place their ads on Facebook.

55. As a user, Facebook does not take any money from us. But you may be surprised to know that Facebook earns an average of 600 rupees from us in a year by showing us ads.

56. People interact 88% more with the posts that are made on Facebook between 10 pm and 11 pm. At the same time, people who have a Question Mark (?) at the end of the posts interact with them on average 162% more.

57. The most shared content on Facebook is Videos. On average, a video is shared 90 times on Facebook and more than 75% of the views on videos come from mobile devices only.

58. Facebook is rapidly reducing the organic reach of its posts. Simply put, now our posts do not reach all our friends. The more people interact with our post, the more people it reaches. Facebook is doing this so that marketers can use its ads. For this, Facebook has also created a separate platform Facebook Business.

61. More than 1.8 million likes come on Facebook every minute.

62. There was a time when the most users in the world on Facebook were from America, but now India has left America far behind.

63. The first to join Facebook was an Indian woman named Shila Tandrashekara Christian.

64. According to estimates, if the Facebook server becomes slow, then Facebook will suffer a loss of 25 thousand dollars per minute on average.

65. Mark Zuckerberg wanted to name the Facebook like button awesome, but he did not pay much attention to that thing, after which this icon is recognized as a like button today.

66. There are attacks on Facebook by hackers equal to about 6 lakhs.

68. As of September 2013, the percentage of children aged 15 to 34 on Facebook is about 66% and the strangest thing is that 45% of users 65 or older are on Facebook as well as 70% of users on Facebook are friends with their parents.

70. The first woman engineer to work on Facebook is Ruchi Sanghvi who gave 2 of the news feed on Facebook.

71. 41% of the population of the state of California is in contact with Facebook, Texas is number 2 on Facebook with 9 lakh users and New York is number 3 with 8 lakh.

Facebook is a social media platform on which we can send friend requests to any person and make friends with them. On Facebook, we can share photos and videos as well as chat. Facebook is the largest social networking site in the world.